“The Square is a sanctuary of trust and caring. Within it we all share equal rights and obligations.” 纵观整部影片，我其实并没有觉得“Christian们”所代表的那部分人群与这句本就不存在的口号有什么相冲之处，至少从奥斯特伦德阐释的角度来看没有。退一步讲，现代艺术又何德何能需要为社会层面上的困境与停滞不前买单呢？阅罢奥斯特伦德版本的当代寓言，闹过笑过之后，只想套一句《Nashville》结尾的歌词作为回应，“You might say they are stupid, but it don’t worry me.”

It was just one of the pleasures of exploring Addis Ababa, the capital of the oldest independent country in Africa. The capital, where both Orthodox Christianity and Islam are practiced, is an extraordinary, fascinating and sometimes heartbreaking city. 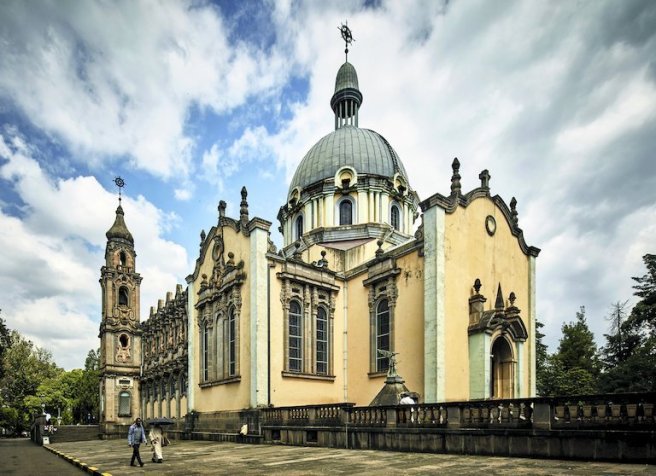 Film Forum’s Introduction on Au Hasard Balthazar: A little donkey is suckled by its mother, then baptized “Balthazar;” a girl and boy say goodbye at the end of summer: a vision of paradise. Years pass and the now-teenaged Marie (Anne Wiazemsky, later Godard’s wife and star, and today a celebrated author) finds herself drifting into more and more destructive situations, including involvement with a local juvenile delinquent; while Balthazar moves from owner to owner, some kind, some cruel, some drunkenly careless. But as critic J. Hoberman pointed out, “this is the story of a donkey in somewhat the way that Moby Dick is about a whale.” God, as ever in the work of legendary filmmaker Bresson, is in the details: the elliptical editing, with its abrupt cuts, off-screen space, and as much focus on the hands of the non-pro cast as on their faces; sound design alternating between classical music and natural sounds; the accumulation of cruelties endured by Marie and Balthazar; and the religious symbolism, from baptism to martyrdom – with the silent Balthazar transformed into a patient, long-suffering saint (“the most sublime cinematic passage I know.” – Hoberman). In a body of work known for its purity and transcendence, Balthazar is perhaps the most wrenching of Bresson’s visions, voted 19 in the 2002 BFI Sight & Sound critics and filmmakers poll of all-time great films.

NYFF55’s Introduction on On the Beach at Night Alone: Hong Sang-soo’s movies have always invited autobiographical readings, and his 19th feature is perhaps his most achingly personal film yet, a steel-nerved, clear-eyed response to the tabloid frenzy that erupted in South Korea over his relationship with actress Kim Min-hee. The film begins in Hamburg, where actress Young-hee (played by Kim herself, who won the Best Actress prize at Berlin for this role) is hiding out after the revelation of her affair with a married filmmaker. Back in Korea, a series of encounters shed light on Young-hee’s volatile state, as she slips in and out of melancholic reflection and dreams. Centered on Kim’s astonishingly layered performance, On the Beach at Night Alone is the work of a master mining new emotional depths.

NYFF55’s Introduction on Lover for a Day: Lover for a Day is an exquisite meditation on love and fidelity that recalls Garrel’s previous NYFF selections Jealousy (NYFF 2013) and In the Shadow of Women (NYFF 2015). After a painful breakup, heartbroken Jeanne (Esther Garrel) moves back in with her university professor father, Gilles (Eric Caravaca), to discover that he lives with optimistic, life-loving student Ariane (newcomer Louise Chevillotte), who is the same age as Jeanne. An unusual triangular relationship emerges as both girls seek the favor of Gilles, as daughter or lover, while developing their own friendship, finding common ground despite their differences. Gorgeously shot in grainy black and white by Renato Berta (Au revoir les enfants), Lover for a Day perfectly illustrates Garrel’s poetic exploration of relationships and desire.

NYFF55’s Introduction on Call Me By Your Name: A story of summer love unlike any other, the sensual new film from the director of I Am Love, set in 1983, charts the slowly ripening romance between Elio (Timothée Chalamet), an American teen on the verge of discovering himself, and Oliver (Armie Hammer), the handsome older grad student whom his professor father (Michael Stuhlbarg) has invited to their vacation home in Northern Italy. Adapted from the wistful novel by André Aciman, Call Me by Your Name is Guadagnino’s most exquisitely rendered, visually restrained film, capturing with eloquence the confusion and longing of youth, anchored by a remarkable, star-making performance by Chalamet, always a nervy bundle of swagger and insecurity, contrasting with Hammer’s stoicism.

NYFF55’s Introduction on Spoor: Janina Duszejko (Agnieszka Mandat) is a vigorous former engineer, part-time teacher, and animal activist, living in a near wilderness on the Polish-Czech border, where hunting is the favored year-round sport of the corrupt men who rule the region. When a series of hunters die mysteriously, Janina wonders if the animals are taking revenge, which doesn’t stop the police from coming after her. A brilliant, passionate director, Agnieszka Holland—who like Janina comes from a generation that learned to fight authoritarianism by any means necessary—forges a sprawling, wildly beautiful, emotionally enveloping film that earns its vision of utopia. It’s at once a phantasmagorical murder mystery, a tender, late-blooming love story, and a resistance and rescue thriller.